On August 21, 2019, Latvian airline "airBaltic" welcomed its partners and employees at Riga International Airport where a very special event was held to honour the 30th anniversary of the Baltic Way that will be marked on August 23, 2019.

Egils Levits, President of the Republic of Latvia: "For Latvia, Estonia, and Lithuania, August is the month of freedom and our special shared destiny of the Baltics. Thirty years ago, in Estonia, Latvia, Lithuania, and everywhere in the world, almost every Balt joined the Baltic Way in their hearts and minds at that time by striving for the freedom of their relatives and themselves and the independence of all three Baltic States." 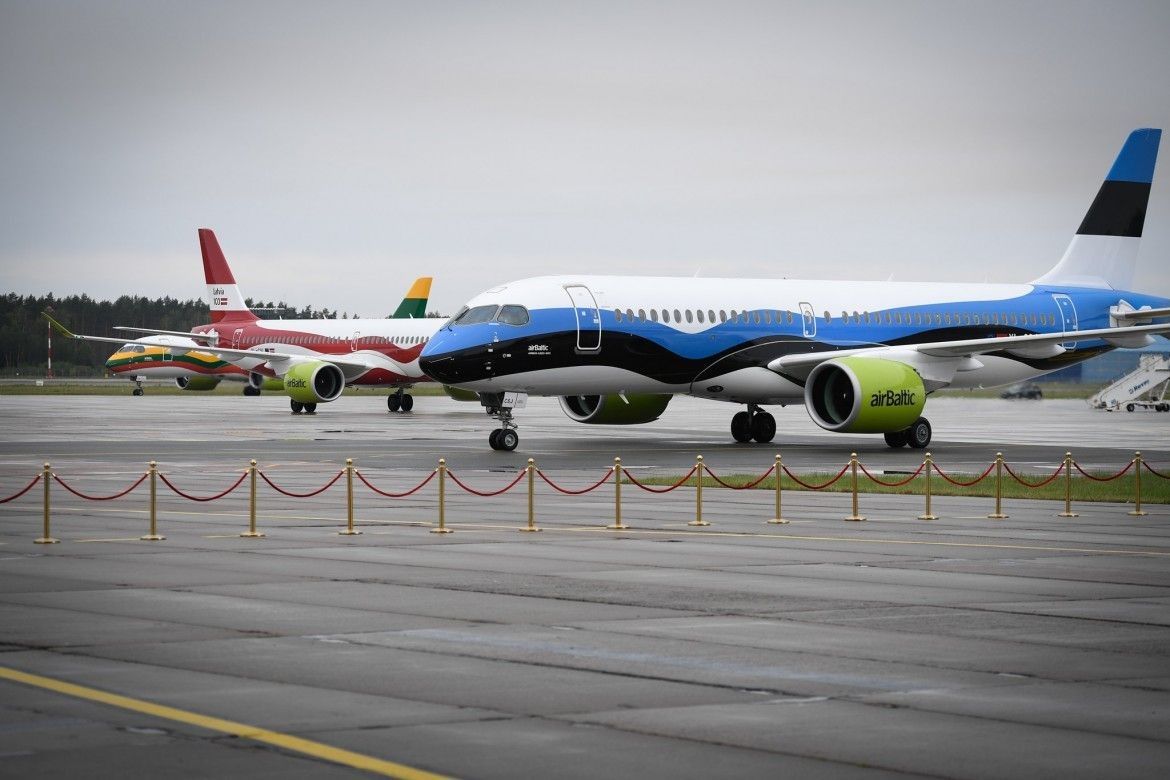 Egils Levits, President of the Republic of Latvia adds: "I extend my gratitude to airBaltic for the beautiful and creative idea of ​​painting three new aircraft into the flag colours of Latvia, Estonia, and Lithuania, the national colours of our nations. airBaltic reminds the world of the colours of our flags in a very special way. At every airport these airplanes will reach, their livery will be an opportunity to tell the story of our countries and our very special shared destiny. May airBaltic have a great opportunity for all of us in Latvia, Estonia, and Lithuania to enjoy the restored freedom and openness to the world!"

Martin Gauss, Chief Executive Officer of "airBaltic": "We are proud to host this event in honour of the Baltic Way – a unique, peaceful demonstration that showed the world how determined and unified the Baltic people were in regaining their freedom. Together with amazing partners, we have created a special series of liveries and a song to honour the anniversary of this historic event and demonstrate Baltic solidarity. With more than 80 direct routes, we provide the best connectivity to and from the Baltics. We are committed to the Baltic states and will continue our sustainable growth path to promote the future development of Latvia, Estonia, and Lithuania."

Artūras Žurauskas, Ambassador Extraordinary and Plenipotentiary of the Republic of Lithuania to the Republic of Latvia: "Nations sharing common history, culture and vision and acting in a coordinated manner are invincible on their way to freedom, independence, prosperity and historical justice."

Karmen Laus, Deputy Head of Mission of the Embassy of Estonia in Riga: “The day of 23rd of August remains one of the most remarkable examples of peaceful protest in history and it led us to restore the independence our countries. The Baltic Way brought together many generations and built a bridge across our countries. And the saying – Together we stand, divided we fall – is viable today as it was 30 years ago.”

During the event, "airBaltic" together with Baltic musicians – Latvian band Instrumenti, Lithuanian singer Jazzu and Ewert Sundja, the leader of the Estonian band Ewert and the Two Dragons – presented a gift to Latvia, Lithuania, and Estonia – a song dedicated to the 30th anniversary of the Baltic Way that is called Via Baltica.

Foto / Ilmars Znotins / VPKThe composer of the new song is Reinis Sējāns (Instrumenti) and the lyrics were written by Latvian poet Marts Pujāts but were localised into Estonian by Estonian writer Contra (Margus Konnula) and Estonian musician Ewert Sundja, but into Lithuanian by Lithuanian singer Jazzu.

The new song encourages us to remember and pass on the value of freedom from generation to generation – the freedom that the people of these countries yearned for with the Baltic Way.

In addition, at the event all three "airBaltic" Airbus A220-300 liveries that carry the national flag motives of the Baltic states were presented side by side for the first time as a symbol of "airBaltic’s" roots and commitment to the Baltic region.

On August 23, 1989, a unique and peaceful political demonstration took place. Approximately two million people joined hands, forming more than 600-kilometre human line from the Estonian capital Tallinn via Riga, Latvia to Vilnius in Lithuania. Known as the Baltic Way, it demonstrated the unity of the Baltic states in their efforts to gain freedom and independence from the Soviet Union.

"airBaltic" serves over 70 destinations from Riga, Tallinn and Vilnius, offering the largest variety of destinations and convenient connections via Riga to its network spanning Europe, Scandinavia, the CIS and the Middle East.