The 18th of November, 1918, when the Republic of Latvia was proclaimed, and the 4th of May, 1990, when its independence was restored, most vividly capture the spirit of Latvia. They’re interrelated dates. When you mention one, you have to think about the other. Both encapsulate the fulfilment of the will of the Latvian state. Both are the realized dreams that seemed unattainable to a pragmatic observer. Autumn and spring. Without the first, the second would not be possible. Without the second the first would not be recovered. 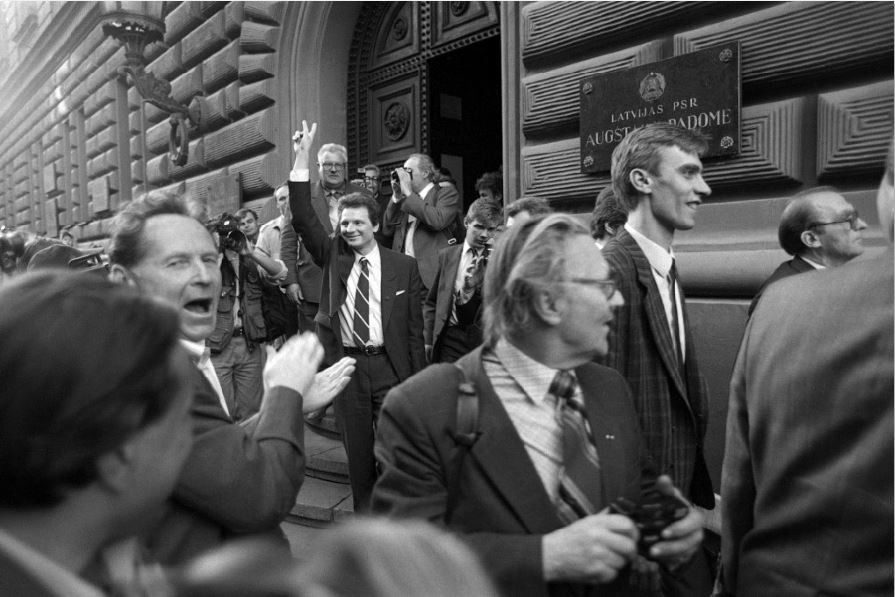 On the afternoon of the 18th of November, 1918, at the City of Riga Second Theatre (now the Latvian National Theatre), the birth of the Latvian state was attended by a few hundred representatives of Latvian political parties and the People's Council, as well as other public figures. The unexpected, and for some, the quite incomprehensible news, reached the general public relatively slowly - through newspapers, telegrams, a handful of witnesses and letters. However, a couple of years of armed struggle for independence was ahead, which required several thousand victims.

On the 4th of May, 1990, every inhabitant of Latvia could follow the adoption of the Declaration of the Supreme Council of the Latvian SSR "On the Restoration of the Independence of the Republic of Latvia" broadcast live on radio and television.

Never before and never again have so many happy, radiant people been seen together on the banks of the Daugava with such a rain of tears of joy. A sea of peoples’ hands rose like sprouts from the snow-covered earth against the spring sky with fingers outstretched in the sign of Victory. 45 years after the end of the Second World War, May the 4th became Latvia’s Victory Day! The second - after victory in 1919-1920 War of Independence.

There was a desire to believe that the occupying power, which for decades undermined Latvia with mass deportations, communist genocide, Soviet chauvinism, ignorance of individual and national rights, violent socialist industrialization and collectivization, was finally defeated. Not physically. The occupation army and the headquarters of the USSR Baltic War Area remained in Riga for a few more years. The KGB too. There was also a Latvian Communist Party hostile to Latvia, but under its auspices, Interfront, various "workers’", committees for the defence of the USSR Constitution, and the USSR army societies.

Pan-USSR factories continued to support Soviet militarism and threaten to strike. Latvians were bombarded by Moscow propagandists with the usual insults of "bourgeois nationalism", "fascism" and "ingratitude". The pro-Kremlin faction "Equality" within the Supreme Council of the Republic of Latvia was actively hostile to Latvia and did not vote for independence.

The Soviet smog didn’t allow for breathing freely yet. However, shoulders bowed by humiliation started to straighten with self-confidence. Deep, inner vitality gained victory over depression and hopelessness. An understanding that the only chance for survival was a return to the November 18, 1918 Latvia, no matter what it cost, became the overwhelming collective consciousness.

The 4th of May Victory Rally, organized by the Peoples’ Front on the 11th of November embankment just after that fateful vote, only strengthened the inner resolve, in such contrast to Soviet reality, that in the future, the fate of Latvia will be determined only on the banks of the Daugava.

At that moment, it could not have been predicted that we would face a couple of years of non-violent struggle with a violent enemy, with two coup attempts and casualties. There was no guarantee that mass deportations, persecution of free-spirited people and destruction would not resume. As under the conditions of a great war or epidemic, uncertainty reigned with only a faint idea of what the next day might bring. The only thing that was clear was the conviction that our ideal goal was the November 18, 1918 Republic.

It was now or never, which meant - to be or not to be a nation for one brought to the brink of being a minority in its own country.

On the 4th of May, 138 of the 201 members of the newly elected Supreme Council chose the optimistic "now" and the hopeful "to be". Slightly more than necessary, even in accordance with the Constitution of the Latvian SSR imposed by the occupying power, to legally and in accordance with the best examples of non-violent struggle, repeal and restore the pre-war Latvian Constitution. The fateful decision was followed by all the supporters of the largest "spiritual army" in the history of Latvia - the People's Front. At home, at work, on the road. Outside the Supreme Council building on Jēkaba Street, every vote FOR was greeted by the jubilant cheers of thousands of supporters.

Among the honorary guests of the Supreme Council of Latvia was Vytautas Landsbergis, Chairman of the Supreme Council of Lithuania, who had already declared independence on the 11th of March. At that time, Lithuania was under an economic blockade by the USSR. USSR President Mikhail Gorbachev called for a "freeze" on Lithuania's declaration of independence. At the same time, he was probably aware that the extension of similar sanctions against Latvia would be painful for Moscow's own centralized, dysfunctional economy.

By following Lithuania and not "freezing" our Declaration of Independence, we gained traction in this war of argument and ideas with the Kremlin. The most radical possible reaction to the whims of the totalitarian regime turned out to be the right one. The conviction that a peaceful, uncompromising liberation from the Soviet empire is possible, was strengthened by the sense of Baltic solidarity, as well as the success of the Latvian Peoples’ Front so far, in walking the parliamentary path to independence.

The Power of the Declaration

Parliamentary revolution would be the most accurate description for the period from the 4th of May to the 18th of November. Its impact on the present and the future hasn’t been fully studied, assessed or understood to this very day. This is a task for future political scientists, historians, lawyers, social anthropologists, economists. The political, legal, social, cultural and economic reconstruction of the country took place in a unique way under conditions of confrontation between two parallel powers - the USSR and the Republic of Latvia – with, for all intents and purposes, closed borders, controlled by the KGB or rather, an army of Soviet  secret service border guards.

Fortunately, with their experience and knowledge of the free world, representatives of the Latvian exile community came to the rescue. The draft 4th of May declaration was prepared by Egils Levits, a lawyer living in Germany at the time and the President of Latvia now. Deputies of the Supreme Council later participated in the development of the Declaration: Romāns Apsītis, Rolands Rikards, Vilnis Eglājs, Andrejs Krastiņš, Tālavs Jundzis, Aivars Endziņš. It was discussed, clarified, and amended by the Peoples’ Front faction of the Supreme Council, winning out over all other proposals.

They included aspirations of founding a new Latvian state by renouncing the succession and citizenship legacy of the 18th of November Republic, a "free Soviet Latvia in a free Soviet Union" and a version similar to the decision by the Estonian Supreme Council - to set only a transitional period for independence talks, giving a bigger role to the Estonian Citizens' Congress. The decision in favour of Egils Levits' concept was facilitated both by the events in Lithuania and the successful development of this document on the basis of international law and historical truth.  The cornerstone of the declaration was the idea of the continuity of the 18th of November state.

The vote of the Latvian Peoples’ Front, the Estonian Peoples’ Front and the Lithuanian Movement "Sajūdis" USSR Peoples’ Deputies (at the USSR Congress of Deputies in Moscow at Christmas 1989) on the illegality of the secret annexes to the Hitler-Stalin Pact annihilating the Baltic States, since their signing in August 1939, proved to be important in August. The Kremlin's insistence on suspending the Latvian Declaration of Independence or following the declaratory "withdrawal" procedure provided for in the USSR Constitution, could now be safely rejected as it now had basis in USSR legislation.

The 4th of May declaration became a powerful shield, impervious to Soviet propaganda yet deeply inspiring for Latvia. A concise, far-sighted and programmatic document, allowing no doubt in the correctness of the choice, ensured that it would be referred to even in times of the greatest danger.

The Soviet leaders themselves, never entered into any discussion about the content of the Latvian Declaration of Independence. Apart from demagoguery, what alternative would they propose? On April 17, 1990, the then Chairman of the Presidium of the Supreme Council of the Latvian SSR Anatolijs Gorbunovs, Chairman of the Council of Ministers of the LSSR Vilnis Bresis, Member of the Board of the People's Front Ilmārs Bišers and I introduced it to the President of the USSR Mikhail Gorbachev. The answer followed: "The people will not accept it and you will depose you!"

Would-be deposers however appeared. After the 4th of May, the Supreme Council building was attacked by Soviet military school cadets and Soviet soldiers dressed in civilian clothes, the Communist conjured-up All-Latvia Rescue Committee, and KGB provocateurs. But not the population. Already on the 23rd of April, at the meeting of deputies of all levels of Latvia at the Daugava Stadium, about eight thousand people's representatives supported the adoption of the Declaration of Independence. To make the responsibility to vote for the freedom of future generations even more steadfast, on the early morning of May 3, the People's Front called on its deputies to make a solemn promise in front of the Mother Latvia memorial at the Riga Brothers' Cemetery, witnessed by the spirits of the Latvian riflemen, the heroes of the War of Independence and the rest who suffered for Latvia’s independence.

Should we justify our existence and explain to the deaf that our people also have their inalienable rights to this world? Our time had come. The 4th of May declaration illuminated our "eternal 18th of November."