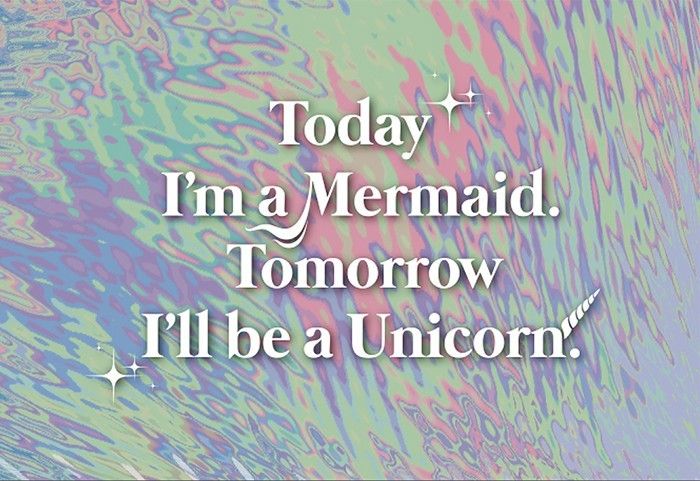 Within the framework of the Riga Photography Biennial 2018, the exhibition Today I’m a Mermaid. Tomorrow I’ll Be a Unicorn will be on view in Gallery Museum LV.

The exhibition Today I’m a Mermaid. Tomorrow I’ll Be a Unicorn features seven artists and several global pop megastars. The project’s title is derived from a popular slogan mass printed on infant creepers, t-shirts and other items of clothing to promote sales in stores and online. The ambiguous message can be interpreted either as a critical socio-political commentary on contemporary society, its shifting values and peculiar heroes, or as an invitation to let one’s imagination roam free, without defining or limiting oneself within set frameworks of identity and thinking.

The exhibition draws attention to the influence of fantasy, fiction and the absurd on various social groups within 21st century reality, where particular significance is given to social identities such as national, ethnic or cultural belonging. There is a particular focus on “magical identity”, which continues to exist as a form of mythological thinking within the consciousness and habits of rationally-based Western civilisation. In the child’s world, magical identity co-exists with other social identities depending on the desired projections, effortlessly transforming the child into a princess, an astronaut, an elf, a soldier, a mermaid, or a rainbow coloured pony/unicorn. As the individual grows up, this imagined identity may become a way to provoke society outside the group with which the individual identifies, or to express protest and criticism in the context of various youth subcultures. Often such magical identities are created with a help from literature, cinema, art, history and pop culture, which in and of themselves are vivid mirrors of society’s values and fantasies. A significant role is also played by globalisation and the growth of information media, which has resulted in hybrids of Western and Eastern pop culture as well as ironically exotic exhibitions in postcolonial countries.

Against a backdrop of the active build-up of armaments, nationalists and populists taking power, the refugee crisis or “the migration of peoples” across Europe, and nuclear ping pong between the USA and North Korea, there has been a rebirth of faith in military generalissimos and exalted leaders. In the context of these global events, the latest works by Latvian photographer Reinis Hofmanis from his LARP (live action roll-playing game) and Heroes (cosplay or costume games) series have become more than just portraits of certain interest groups. This space between reality and the magical world becomes a refuge for human ideals and the dreams of Hollywood screen idol-like gladiators. The so-called “magic soldier” theme can also be discerned in the screen prints of early 20th century photographs by Latvian artist Kristians Brekte, in which the faces of anonymous soldiers, society ladies and children are coloured in black metal style or otherwise manipulated to create unusual layerings of time, meaning and identity.

The focus of attention for Floris Schönfeld, a Texas-born artist currently residing in Amsterdam, is various groups of enthusiastic people who are passionate about imaginary characters and worlds and magic rituals.

One of these projects is the result of collaboration with Trekkies (fans of the American ci-fi TV series Star Trek) who dress up as Klingons (humanoid civilization) and speak Klingon with each other. In the process of creating the first Klingon opera on Earth, the artist had to continually test the project’s authenticity with the Trekkie canon to ensure that the opera and its related activities would be accepted as part of Klingon culture. The second project by Schönfeld in the exhibition is about a resident of San Francisco who believes in a conspiracy involving an intergalactic parliament, and a reality show in which he and his family have accidently become stars.

The subjects which attract Alina Kleitman, an artist from Kiev and a PinchukArtCentre Art Prize finalist, are the female body, sexual emancipation, aggression and the degradation of modern society. For her part, Barcelona-born artist Natalia Ibáñez Lario is interested in the forms of self-reflection by young women in social media, turning her body and lifestyle into a consumer product. The artist’s works can be described as a “celebration” of aggressive capitalism in a cute and girly way.

Expanding on the visual potential of the subject, representatives of pop culture are also present at the exhibition. Their projects are characterised by strong cooperation between different artists, experimental formats, and the ability to transform contemporary mass culture products into both colourful visions and social activism. The self-produced video clip Genesis (2012) by Canadian musician and artist Grimes combines Christian iconography (particularly influenced by Hieronymus Bosch) and anime aesthetics, creating a modern, messianic action video in the best traditions of Medieval Catholicism.

American director Harmony Korine creates an offbeat version of Bonnie and Clyde in his absurd short film Umshini Wham (translation: “Bring me my pistol”, 2011), whose heroes are the eccentric South African rave rap group Die Antwoord. In the film, the musicians are dressed in the costumes of Japanese animation hero Pikachu from the Pokémon series, portraying outsider scavengers-gangsters who cruise around the village in wheelchairs. The exhibition also includes a video work by YouTube star, director and special effects artist Mike Diva, and devoted to the US presidential elections. Using highly eclectic mass culture symbols, including advertising and music clip aesthetics, the artist makes witty, cutting political statements. The unveiling of the project at the MuseumLV space will also feature the tamed fashion show Kebab by Ivars Grāvlejs and Margrieta Griestiņa.

Created and done by: Riga Photography Biennial in cooperation with Gallery Museum LV