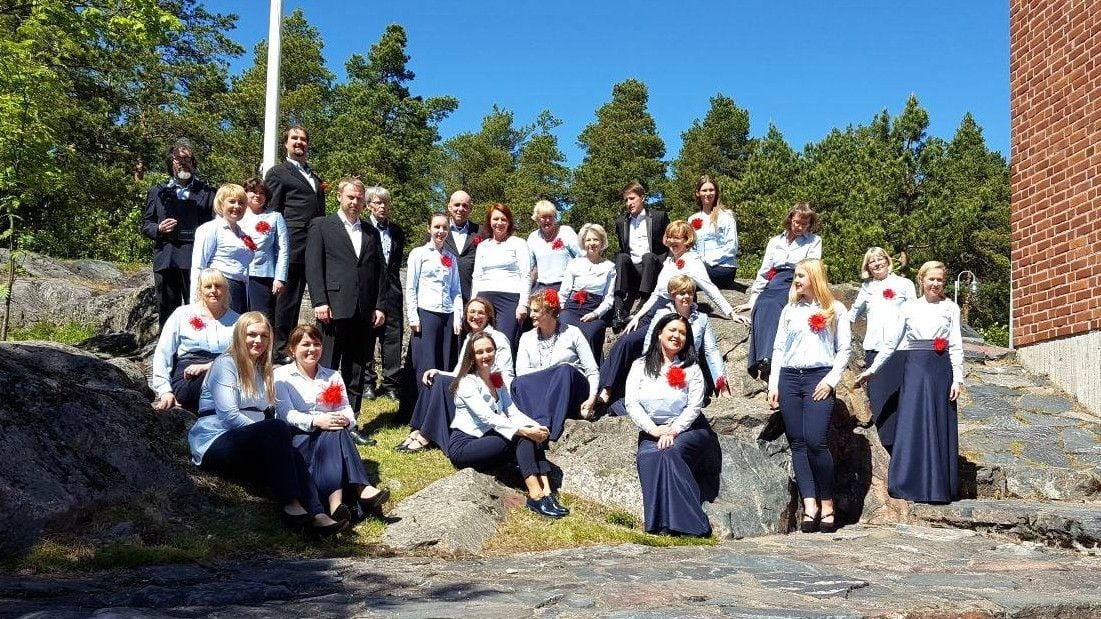 The Latvian-Finnish Choir "Ziemeļmeita" conducted by Ilmārs Millers and Karol Kisiel and Alūksne teachers choir "Atzele" conducted by Jānis Baltiņš and Ina Perevertailo, will give a concert "Amber bridge" in Loimaa city in a Western part of Finland and in Helsinki at 9th and 10th February of 2018.

The location of those two choirs from the opposite banks of the Baltic Sea is giving the name for the concert "Amber Bridge".

The choirs are meeting on an amber bridge. The Aluksne Teachers' Choir "Atzele" from the breathtaking northland of Latvia has brought the most beautiful melodies of the Latvian classical choral music to Finland. An outstanding pieces of XXVI Latvian Nation-wide Song and XVI Dance Celebration dedicated to centenary of Latvia are included in the concert. The music written by such beloved Latvian composers as Raimonds Pauls, Imants Kalniņš and Uģis Prauliņš is included in performance.

Colorful choral songs from Nordic region will be performed by the Latvian-Finnish Choir "Ziemeļmeita" as appreciations for place they live and to the celebrated centenary of Finland.

The Latvians living in Finland and people interested in Latvian culture and choral music are welcomed to attend the concert. They are going to have a chance to participate to a musical journey through the amber bridge and to immerse feet in Nortlatvian sandy beaches for a while.

The concert is oranized by diaspora of the Finnish Latvians and by support of a municipality of Loimaa city and the Loimaa Evangelical Folk High School. The choir Ziemelmeita is thankful for life long lasting cooperation with Latvian Embassy in Finland for working place and performances. The Helsinki Concert will take place in the historic Baldera Hall in the city center of Helsinki.

The choir "Ziemeļmeita" was founded in 2012. And it was taking part to XXV Latvian Nation-wide Song and XV Dance Celebration right in the next year. The quality of choir performance has significantly improved by targeted work of conductor Ilmārs Millers. The Ziemelmeita has got the highest points in the national amateur choir contest for The Best Latvian Chorus from Abroad in spring 2017. By increasing of artistic level of choir, the number of concerts has grown. Ziemeļmeita have got recognition between Latvian choirs oversea or in Latvian diaspora. It has raised interest about Latvian music in Finland too. Conductor Ilmārs Millers is Member of European Latvian Association (ELA) Artistic Committee and Ilmārs Millers is performing as the chief conductor at the European Latvian Cultural festivals. The chorus Ziemeļmeita is taking part at happenings organised by ELA at Brussel, Esslingen, and Stockholm. The conductor Ilmārs Millers is traveling from Latvia to Finland once on a week to lead a choir. Singers in Ziemelmeita strengthen as a vocal competence so the feeling of belonging to own national culture and traditions. Concerts organised by Ziemeļmeita is providing chance to meet for Latvians form different areas.

The Aluksne teachers' choir "Atzele" is visiting Finland and performing in Amber Bridge concert together with the Latvian-Finnish choir "Ziemeļmeita" for first time. The choir “Atzele” was formed in 1986. It got a name after a name of ancient region in the north-east of Latvia. One of the most experienced Latvia’s conductors Jānis Baltiņš is leading the choir. Jānis Baltiņš is a head of the choral conducting department at the Jāzeps Vītols Latvian Music Academy, a head of the choral conducting division at Jāzeps Mediņš Specialised Riga Music high school, a chief conductor of the Sigulda district choirs. A conductor Ina Perevertailo is also conducting choir "Atzele”. The choir has taken part in international and local contests, festivals and performed countless vivid concerts. Atzele is highly appreciated regional choir in Latvia and is going to perform the best of Latvias classical choral music on the Amber Bridge.